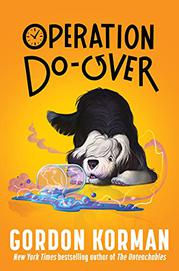 Seventh graders Mason Rolle and Tyrus Ehrlich are more than best friends, they’re platonic soul mates. That is, until cool New Yorker Ava Petrakis shows up at Pasco Middle School, befriends them both, and starts flirting with Mason. The boys attempt to create a bros-before-girls pact, promising that they won’t ruin their friendship by trying to date her, but when Mason kisses Ava during a freak storm at the Harvest Festival, he sets in motion a chain of events that destroys their friendship and ends with his getting expelled from school in his senior year after accidentally assaulting his favorite teacher. A near-death experience mysteriously thrusts Mason back to that fateful middle school moment, and he tries to figure out both how he traveled through time and how he can fix his future. Watching Mason learn from mistakes and explore new aspects of himself (especially with a 17-year-old consciousness trapped in a preteen body) is vicariously satisfying, and the sheer fascination of his predicament will keep readers turning pages, anxious to find out if he succeeds. The story ends well but with no conclusive answers to the questions Korman tantalizingly dangles throughout. Main characters read as White.

A satisfying story—right up until readers are left wanting more.