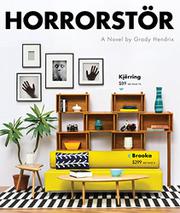 A hardy band of big-box retail employees must dig down for their personal courage when ghosts begin stalking them through home furnishings.

You have to give it up for the wave of paranormal novels that have plagued the last decade in literature; at least they’ve made writers up their games when it comes to finding new settings in which to plot their scary moments. That’s the case with this clever little horror story from longtime pop-culture journalist Hendrix (Satan Loves You, 2012, etc.). Set inside a disturbingly familiar Scandinavian furniture superstore in Cleveland called Orsk, the book starts as a Palahniuk-tinged satire about the things we own—the novel is even wrapped in the form of a retail catalog complete with product illustrations. Our main protagonist is Amy, an aimless 24-year-old retail clerk. She and an elderly co-worker, Ruth Anne, are recruited by their anal-retentive boss, Basil (a closet geek), to investigate a series of strange breakages by walking the showroom floor overnight. They quickly uncover two other co-workers, Matt and Trinity, who have stayed in the store to film a reality show called Ghost Bomb in hopes of catching a spirit on tape. It’s cute and quite funny in a Scooby Doo kind of way until they run across Carl, a homeless squatter who's just trying to catch a break. Following an impromptu séance, Carl is possessed by an evil spirit and cuts his own throat. It turns out the Orsk store was built on the remains of a brutal prison called the Cuyahoga Panopticon, and its former warden, Josiah Worth, has returned from the dead to start up operations again. It sounds like an absurd setting for a haunted-house novel, but Hendrix makes it work to the story’s advantage, turning the psychological manipulations and scripted experiences that are inherent to the retail experience into a sinister fight for survival.

A treat for fans of The Evil Dead or Zombieland, complete with affordable solutions for better living.