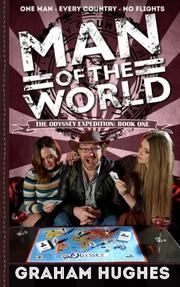 MAN OF THE WORLD

Book 1 of The Odyssey Expedition

A witty, resilient Liverpudlian sets out to visit every sovereign nation in the world in this travelogue.

British adventurer Hughes plans to visit every country and territory in the world. In order to satisfy Guinness World Records, he agrees to follow a few basic rules: He can’t travel by plane, nor hitchhike, nor use anything other than public transportation; he must set foot on dry land in each place; and “A visit to a far-flung territory does not count as a visit to ‘the motherland.’ ” This first installment of a planned trilogy begins on Jan. 1, 2009, on the border between Argentina and Uruguay and ends, 133 countries and 6 territories later, on Dec. 31, 2009, at the Egyptian pyramids. It covers the author’s journey through the Americas, Europe, and Africa, and it’s bursting with fascinating, hilarious, and occasionally terrifying anecdotes. While traveling across the Gulf of Mexico, he nonchalantly recounts that a yacht captain used “a fishing hook to put stitches in [his] head with no anaesthetic other than a bottle of scotch.” In the Congo, he’s inexplicably thrown into a prison cell that “was like somewhere you might wake up if you were a victim of the Jigsaw Killer” in the movie Saw. Yet the mood is almost always upbeat, and readers will succumb to Hughes’ deliciously blunt humor: “the fact that I still hadn’t suffered the squits the entire journey…only goes to prove that my DNA should be extracted and cloned in order to create the race of ginger super-soldiers that will one day RULE THE WORLD.” The book is made even more amusing by editor’s notes that occasionally translate the author’s Liverpool slang: “Helga rustled up some scouse (Liverpool stew) for me to eat and it was proper boss la….Editor’s Note: Apparently in Liverpool this means really good.” The straightforward, chronological approach leaves little time for evocative description, but it adds to the urgency as the author visits country after country. It’s also carefully illustrated with maps and information cards throughout. Readers will be eager to read the next book in this series.

A riveting journey recounted by an irrepressible, highly likable narrator.