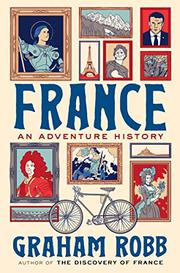 Melding memoir, travelogue, and history, British biographer and cultural historian Robb offers a sweeping, spirited, and refreshingly unsentimental portrait of France, from the Bronze Age to the present. Traveling by bicycle, train, and on foot, the author and his wife ventured all over the country, searching for the nation’s social, political, and geographical past and alert to intimations of its future. Robb brings to his travels a “taste for apparently futile journeys of discovery,” an impressive command of history, and lively curiosity. Promising a book different from the “express train” narratives that rush through centuries focused on major figures and events, the author takes a slow route. His well-populated narrative includes Julius Caesar, Napoleon, and de Gaulle but also Ermoldus Nigellus, a poet with a “cheeky sense of humour” whose chronicles bore witness to ninth-century Brittany; early medieval polymath Gerbert d’Aurillac, who became Archbishop of Reims and, as Sylvester II, the first French pope; Jacques-Louis Ménétra, a free-spirited glazier from Paris whose autobiography painted a ribald picture of 18th-century France; and Louis-Napoleon’s ambitious mistress Harriet Howard. In present-day France, Robb discovered 159 towns with the status of “Plus Beaux Village,” looking like “habitats created by committees.” A topography dominated by roadways features some 50,000 roundabouts. The author examines changes in France’s social and political life as represented by the 2015 attack on the satirical magazine Charlie Hebdo, burkini bans at the beach, and the 2018 protests of the Gilets Jaunes. Unlike Francophiles who insist that the essence of France will endure forever, Robb sees a future of vast changes—in land, people, language, and spirit. He appends the volume with a detailed chronology as well as acerbic notes for travelers who may want to emulate his explorations without being killed on their bicycles.