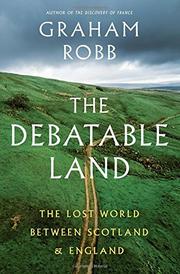 The Lost World Between Scotland and England

Robb (The Discovery of Middle Earth: Mapping the Lost World of the Celts, 2013, etc.) uses his vast knowledge of Celtic history, languages, and geography to create a fascinating book of history and adventure.

Regarding the strange story of what is called the “Debatable Land,” the author turns to writings both ancient and modern as he applies archaeological methods to history. This 33,000-acre site is the oldest detectable territorial division in Great Britain. It is devoid of archaeological evidence between the Roman period and the 1500s, which leads Robb to posit that perhaps it was just uninhabitable. Located northeast of the Solway Firth above Cumbria’s Lake District, it was a no-man’s land, a buffer neither Scottish nor English, and open to murder and mayhem by parliamentary decrees of both countries. Until nearly the 1600s, no buildings or cultivation were allowed, and cattle could pasture only between sunrise and sunset. Cattle thieves plied their trade in a reasonably civilized manner governed by March law, a code common and efficient to both sides and unique to the area. It governed the use of hostages to prevent reprisals, established the traditional days of truce, and ensured compliance. On the truce days, livestock owners would receive the value of the stolen animals in money, corn, or merchandise. Throughout the book, readers will be impressed with Robb’s archival digging, especially as he turns to Ptolemy’s 150 C.E. map of Britain—not just the source, but the fact that the author corrected the grid of Ptolemy’s map, which was inaccurate. Readers will have fun following along with Robb’s intriguing historical journey of discovery through this magical realm. In a series of appendices, the author provides detailed maps of different areas of the region as well as a timeline that runs from 43 C.E. to 1793.

An imagination-stimulating work in which the past seems “to dissolve and reshape itself.”