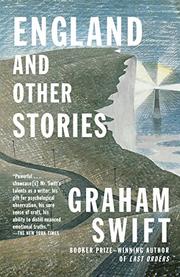 ENGLAND AND OTHER STORIES

The British author of Waterland crams enough life into these vignettes and full-blown stories to be justified in slyly giving his third collection a country’s name.

The opening story sets the recurring theme of postwar changes and displays Swift’s (Wish You Were Here, 2012, etc.) skill in compression, low-key humor, and keen glimpses into the marrow of lives. A roofer born in 1951 does well in the building boom after World War II and even better when he shifts to window cleaning for all those glass-clad high rises. The end of the Raj gets a twist with a second-generation Indian doctor recalling how his Anglophilic father was glad the war had brought him to a land he’d come to love in books, with its “thatched cottages, primroses, bluebells.” Many stories deal with the pain of love and loss. After a young couple sees a lawyer to make their wills, the husband tries to document his love for his wife in a letter never shared as the story moves inexorably to divorce and lawyers, “in duplicate.” One story harks back to World War I, quietly building to a wife’s torn feelings at learning her husband of more than five decades may have abused their daughter years ago and hating her grown child for making such claims so late in her parents’ lives. It’s one of the collection’s rare showcases for a woman. The book ends with the title story, an encounter between a comedian and a coast guard officer who might well speak for Swift in his bemusement about how little he knows of the island he watches over.

The stories recall different eras stylistically as well, bearing echoes of Cheever, touches of O. Henry, and, in one chilling case, of Shirley Jackson’s “The Lottery.” With few weak spots and more than a few killers, it’s a potent gathering.