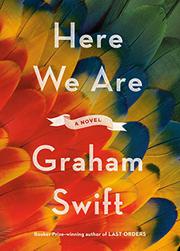 A sleight-of-hand novel about a seaside British revue in the late 1950s, before everything changed.

Master novelist Swift (Last Orders, 1996, etc.) invites readers to see parallels between the tricks he is pulling and the magic act that is the ostensible subject of his novel. Or is it? As Swift writes of a magician and the assistant to whom he is betrothed, “The act had become a fluid phenomenon, yet full of a thrilling tension. You never knew what might happen next. This in itself became part of the attraction.” And so it is with this slight but charming novel, which opens with two men and a woman, introducing a triangle. The woman is Evie ("first of women”), and the names of the two men keep shifting, as the novel suggests that identities tend to do. One is Jack, the emcee of the show, a song-and-dance man in charge of the pacing of the production. The other is magician Ronnie, who becomes “the Great Pablo” at Jack’s behest. Though the novel seems to introduce Jack as the protagonist, it is Ronnie’s backstory that dominates. Where Jack and Evie had both been pushed toward the stage by showbiz mothers, “Ronnie Deane was a different kettle of fish and as Evie, but only with some persistence, would find out, had had a different introduction to the world of entertainment, and a different kind of mother.” Two of them, in fact, or maybe two different childhoods, as he had been sent to safety during the World War II bombings by an impoverished mother to a more privileged home in the countryside. There, Ronnie became a different boy, with a different destiny, one that would lead him first to Jack and then, at Jack’s behest, to Evie. The bare bones of the plot don’t have much more flesh on them, but the hocus pocus of identity and destiny, how we become who we are and make the choices we do, offers plenty of surprise as well as revelation.<

A novel that agrees with Shakespeare that all the world’s a stage.