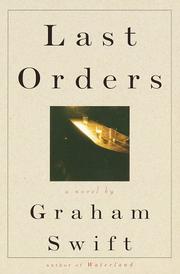 Britisher Swift's sixth novel (Ever After, 1992 etc.) and fourth to appear here is a slow-to-start but then captivating tale of English working-class families in the four decades following WW II. When Jack Dodds dies suddenly of cancer after years of running a butcher shop in London, he leaves a strange request—namely, that his ashes be scattered off Margate pier into the sea. And who could better be suited to fulfill this wish than his three oldest drinking buddies—insurance man Ray, vegetable seller Lenny, and undertaker Vic, all of whom, like Jack himself, fought also as soldiers or sailors in the long-ago world war. Swift's narrative start, with its potential for the melodramatic, is developed instead with an economy, heart, and eye that release (through the characters' own voices, one after another) the story's humanity and depth instead of its schmaltz. The jokes may be weak and self- conscious when the three old friends meet at their local pub in the company of the urn holding Jack's ashes; but once the group gets on the road, in an expensive car driven by Jack's adoptive son, Vince, the story starts gradually to move forward, cohere, and deepen. The reader learns in time why it is that no wife comes along, why three marriages out of three broke apart, and why Vince always hated his stepfather Jack and still does—or so he thinks. There will be stories of innocent youth, suffering wives, early loves, lost daughters, secret affairs, and old antagonisms—including a fistfight over the dead on an English hilltop, and a strewing of Jack's ashes into roiling seawaves that will draw up feelings perhaps unexpectedly strong. Without affectation, Swift listens closely to the lives that are his subject and creates a songbook of voices part lyric, part epic, part working-class social realism—with, in all, the ring to it of the honest, human, and true.