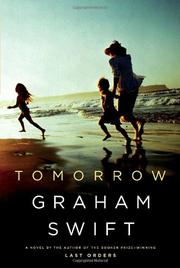 One of Britain’s foremost novelists, Swift (Light of Day, 2003, etc.) displays his profound empathy in a novel that never leaves the mind of its first-person narrator Paula Hook. It all transpires over a few hours on a June night in 1995 and is told as something of a bedtime story by Paula to her sleeping twin children, Kate and Nick. Tomorrow, she explains, their father will reveal something momentous that will change all of their lives. The timing is significant, because the revelation will occur the week after the twins’ 16th birthday and the week before the Hooks’ 25th anniversary. Though she keeps talking about tomorrow, most of the narrative takes place after midnight, so it’s actually today when the family dynamic will be threatened. And though she addresses her story to her sleeping children, she is plainly talking to herself, revealing intimacies about her own life and her relationship with her husband that no mother would likely inflict on her children. Now a successful art dealer, she explains how she met her husband, biologist Mike Hook, how the two met and fell so rapturously in love, but waited nine years after marrying before having children. What she doesn’t explain until well past the novel’s midpoint is what Mike could possibly reveal that could undermine the love that the two plainly feel for each other and share with their children. If there’s a weakness to the novel, it’s that the suspense that Swift takes such pains to sustain makes the climax feel a little anticlimactic. Yet Paula Hook is a character of such heart, soul and intelligence that the reader forgives her foreboding repetition of “tomorrow.” No novelist is better than Swift at celebrating, as Paula explains, “how sweet and treasurable even the most unambitious moments of life can be.”

A richly satisfying novel of blood ties, the interplay of nature and nurture and the secrets that even the closest families keep from each other.