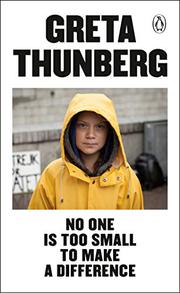 NO ONE IS TOO SMALL TO MAKE A DIFFERENCE

A collection of articulate, forceful speeches made from September 2018 to September 2019 by the Swedish climate activist who was nominated for a Nobel Peace Prize.

Speaking in such venues as the European and British Parliaments, the French National Assembly, the Austrian World Summit, and the U.N. General Assembly, Thunberg has always been refreshingly—and necessarily—blunt in her demands for action from world leaders who refuse to address climate change. With clarity and unbridled passion, she presents her message that climate change is an emergency that must be addressed immediately, and she fills her speeches with punchy sound bites delivered in her characteristic pull-no-punches style: “I don’t want you to be hopeful. I want you to panic. I want you to feel the fear I feel every day. And then I want you to act.” In speech after speech, to persuade her listeners, she cites uncomfortable, even alarming statistics about global temperature rise and carbon dioxide emissions. Although this inevitably makes the text rather repetitive, the repetition itself has an impact, driving home her point so that no one can fail to understand its importance. Thunberg varies her style for different audiences. Sometimes it is the rousing “our house is on fire” approach; other times she speaks more quietly about herself and her hopes and her dreams. When addressing the U.S. Congress, she knowingly calls to mind the words and deeds of Martin Luther King Jr. and John F. Kennedy. The last speech in the book ends on a note that is both challenging and upbeat: “We are the change and change is coming.” The edition published in Britain earlier this year contained 11 speeches; this updated edition has 16, all worth reading.

A tiny book, not much bigger than a pamphlet, with huge potential impact.