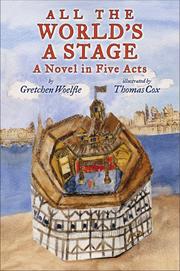 ALL THE WORLD'S A STAGE

A Novel in Five Acts

A novel of Elizabethan theater centers around an unsuccessful thief. Kit is caught up in the excitement of a performance by the Lord Chamberlain’s men at the Theatre. Unfortunately, he is a penniless, runaway 12-year-old orphan forced to work as a cutpurse, stealing money from audience members. Distracted by the drama, he fails in his first attempt and agrees to work for the players to avoid prison. Reluctantly, he is caught up in their hectic world of rehearsal and performance. Woelfle opens a revealing window into 1590s London and its dynamic theater scene. There are intriguing snapshots of one William Shakespeare, who finds his inspiration from street songs and conversations he overhears. Men and boys play the roles of women, sew costumes, rehearse speeches and sword fights and build sets. The scene stealer here is the intrigue behind the stealthy deconstruction of the Theatre and its rebuilding as the Globe due to a legal squabble with the landlord. Against this backdrop, Kit grapples with his own career choices, growing into the satisfying realization that carpentry is his calling. Young Molly, who sells apples in the theater, is a welcome friend and foil. Readers of Gary Blackwood’s The Shakespeare Stealer (1998) will find this equally exciting. The conceit of organizing the story through acts and scenes in lieu of chapters sets the stage nicely for a dramatic tale. (author’s note, glossary, bibliography; illustrations not seen) (Historical fiction. 8-12)