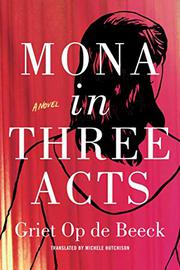 Three episodes in a young woman’s life expose the parental pressures that shape her personality and the consequences as she moves into adulthood.

The long chain of cause and effect within families is exposed in all its subtle, cumulative force in Flemish author op de Beeck’s second novel, her first to be translated into English. Spanning some 25 years, it opens in 1976 with Mona, a 9-year-old middle-class girl, shut in the dark, a punishment inflicted by her strict mother, Agnes. But then Agnes dies in a car accident, and her withdrawn husband, Vincent, quickly remarries, delivering a needy, manipulative stepmother, Marie, to Mona and her young brother, Alexander. Sensitive Mona, constantly anxious not to disappoint or anger her parents, feels responsible for taking care of Alex and, later, her new half sister, Anne-Sophie—even, at times, Marie too. In the second section, Mona is 24, living independently and holding down a prestigious job in the theater. She has friends and a lover who’s an established writer, but people treat her poorly and she permits it, tolerating second-rate relationships rather than confronting them. The last section heralds change, as Vincent succumbs to a life-threatening illness and begins to open up to his daughter about his real affections, about Agnes’ abusive father, and about the circumstances of Mona’s birth. These revelations, and a stranger’s pointed advice—“We forget what we’re worth and don’t dare believe that we genuinely deserve something good”—help Mona to begin the process of change. It’s a simple, predictable scenario and a long one, but there are poignant moments, especially in the late scenes with Victor; and seeing boundaries finally being drawn brings perennial satisfaction.

No surprises in this story of slow, achingly anticipated self-discovery, but the journey is engaging.