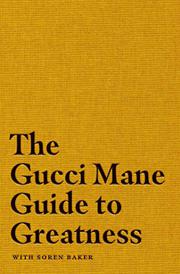 THE GUCCI MANE GUIDE TO GREATNESS

by Gucci Mane with Soren Baker

A hip-hop star who went on his first international tour wearing an ankle monitor explains how to succeed.

“The words you are about to read can help you,” writes Gucci. “That’s because there is truth in them. These are words of wisdom, like the Bible and its proverbs.” Unquestionably, Gucci likes to aim high, as many of his proverbs attest: “Stop Underestimating Yourself”; “Whatever You’re Thinking, Think Bigger”; “Nobody Cares. Work Harder”; “When They Sleep, I’m Grinding”; “Do More, Get More.” And never forget, “Women Are Brilliant.” Gucci not only shares his recipes for success. As in a cookbook that shows pictures of the end result, the author includes dozens of dazzling photos of himself and his beautiful wife, among them a series on his surprise wedding proposal at an Atlanta Hawks game. After the success of his bestselling debut, The Autobiography of Gucci Mane, Gucci has realized there is money to be made in the book business. In addition to the Bible, he has his eye on Malcolm Gladwell and his reported $5 million advances. While he is “cool with Malcolm Gladwell being more celebrated than me as an author…the difference between Malcolm Gladwell and me is that I’m going to make more money because I’m going to make so many books for my following….You can enjoy this book or not, but I’m going to make my fifty-second book, my hundred and eighth book.” Many readers will hope that one of them will be a diet book, as the 100-plus pounds Gucci has lost and kept off are a frequent topic—alas, he doesn’t reveal his weight loss secrets here. Until the next book, try to live the Gucci Mane way. “Avoid lazy and miserable people,” and “Find something to be excited about every day.”

Gucci demonstrates all the bravado and ferocious self-confidence that he counsels—and the photos are a nice bonus.