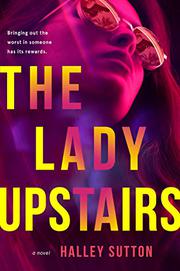 An intricate blackmail scheme goes off the rails in Sutton’s sizzling debut.

When Jo met a woman named Lou three years ago, she was drowning in heartbreak and self-loathing. Her boyfriend (and co-worker) had not only dumped her, but he'd also gotten her fired. Lou showed Jo a way to make him pay and reclaim her life, and Jo has never looked back. Now Jo is running her own jobs for the Lady Upstairs’ Staffing Agency, a front for elaborate sexual blackmail schemes designed to entrap some of the wealthiest, and most morally bankrupt, men in Los Angeles. Only Lou knows who the mysterious Lady Upstairs actually is, but as long as the cash keeps flowing, Jo tries not to sweat the small stuff. When a grift goes wrong, leaving Jo with no incriminating photos or video to force her mark’s hand, she does start sweating it, because she owes money to the Lady Upstairs, and 11 large just went down the drain. To recoup that cash before the Lady resorts to distasteful collection tactics, Jo prepares to run a con on one of the biggest fish in the city. In Sutton’s sweltering LA, where grit and glamour entwine, nothing is free and life is cheap, so a few dirty cops, lots of double dealing, and maybe a little murder are only to be expected. Narrator Jo is a tough cookie, making her flashes of vulnerability, mostly glimpsed in her scenes with Lou, even more poignant. Sutton’s assured and moody prose often channels the best classic LA noir, but this deliciously tawdry and twisty tale is entirely her own. Readers who savor crime stories featuring complex, unapologetic women will be hooked.

A scorching, knockout noir from an author to watch.