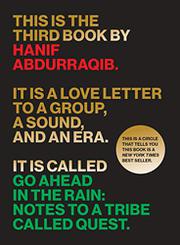 GO AHEAD IN THE RAIN

Notes to A Tribe Called Quest

Poet and essayist Abdurraqib (They Can’t Kill Us Until They Kill Us, 2017, etc.) avoids the temptation to oversell his subject while maintaining a tricky structural balance. He somehow does full justice to the musical achievements of Q-Tip and his crew, to the influence of the musical world on this singular group, and to how deeply the experience permeated the young fan who might not have become a writer—and certainly not this writer—without their inspiration. In recent years, the author found himself with students as young as he once was who, as contemporary hip-hop fans, “had never heard of A Tribe Called Quest, and then, later, only knew them as a phoenix, risen from the ashes.” There was a 17-year interval between albums, and by the time what appears to be the last one was released in 2016, friendships had frayed and a crucial collaborator had died. This is a history of how two boyhood friends, Q-Tip and Phife Dawg, teamed up (though the former overshadowed the latter), how they differed from each other, and how they needed each other. Some of the book takes the form of letters from Abdurraqib to each of them and to others. Elsewhere, the author chronicles the progression of rap and how the way that Dr. Dre challenged Q-Tip was similar to the way that the Beatles pushed Brian Wilson, as well as how the East-West synergy later turned vicious and dangerous. “It is much easier to determine when rap music became political and significantly more difficult to pinpoint when it became dangerous,” writes Abdurraqib toward the beginning of the book, a somewhat inexplicable pronouncement that he proceeds to explicate and elucidate over the rest.

Even those who know little about the music will learn much of significance here, perhaps learning how to love it in the process.