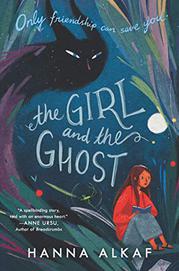 THE GIRL AND THE GHOST

After the death of the village witch, her pelesit, a cricketlike trickster ghost-familiar, must seek a new master who shares the witch’s bloodline.

Suraya, a lonely, impoverished child who is shunned by the local children and held at an emotional distance by her mother, embraces her pelesit inheritance, lovingly naming him Pink. Pink serves as Suraya’s friend and protector, but his retribution against those he believes have slighted Suraya is impulsive and malicious. Disturbed, Suraya extracts a promise from Pink not to hurt others, ever, unless she is in absolute danger. Pink soon breaks his promise when Suraya is bullied by other girls, but when she finally makes her first human friend, Jing Wei, Pink’s protectiveness takes a dangerously jealous turn. As Suraya struggles with the decision to cut Pink loose, darker forces remind them that Pink is not the only malevolent being around. The author’s middle-grade debut immerses readers in Malaysian culture and food as well as weaving in both Islamic elements and pre-Islamic views of ghosts and death. Though aspects of the novel embrace the disturbing and grotesque (which will delight many readers), its conclusion is grippingly heart-wrenching and speaks to deeper themes of family, trauma, and friendship. Suraya and her family are Malay Muslims while Jing Wei is Chinese Malaysian.