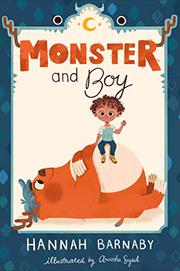 From the Monster and Boy series, volume 1

A boy discovers that monsters are real—and that one lives under his bed.

The monster and the boy—no names given—share a bedroom, but they have never met. The monster is nocturnal and has lived under the boy’s bed for many years; he knows the sound of the boy’s voice and loves the smell of his dirty socks. One night the boy’s mother reads her son a book about monsters, and she tells him that there is no such thing as monsters. Knowing this is untrue, the monster decides to introduce himself. Predictably, this doesn’t go as well as the monster expects, and when the boy screams, the monster swallows him in a panic. This is distressing for both the monster (who just lost his only friend) and the boy (who now finds himself trapped inside a stomach). Eventually the monster coughs the boy out—only to discover the boy is now grasshopper-sized. Humor ensues. In archly amusing fashion, the author breaks the fourth wall—this is marked by teal-colored page backgrounds—reassuring readers during potentially scary parts of the book, filling in background details, or collegially including them in aspects of the storytelling. Teal-flecked grayscale cartoons appear on almost every page, making this a solid choice for new independent readers. As depicted on the cover, the boy has tightly coiled brown curls and pink skin.

No need to be afraid of monsters after reading this sweet and unusual friendship story.