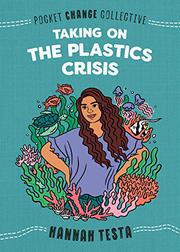 TAKING ON THE PLASTICS CRISIS

From the Pocket Change Collective series

Teen environmental activist and founder of the nonprofit Hannah4Change, Testa shares her story and the science around plastic pollution in her fight to save our planet.

Testa’s connection to and respect for nature compelled her to begin championing animal causes at the age of 10, and this desire to have an impact later propelled her to dedicate her life to fighting plastic pollution. Starting with the history of plastic and how it’s produced, Testa acknowledges the benefits of plastics for humanity but also the many ways it harms our planet. Instead of relying on recycling—which is both insufficient and ineffective—she urges readers to follow two additional R’s: “refuse” and “raise awareness.” Readers are encouraged to do their part, starting with small things like refusing to use plastic straws and water bottles and eventually working up to using their voices to influence business and policy change. In the process, she highlights other youth advocates working toward the same cause. Short chapters include personal examples, such as observations of plastic pollution in Mauritius, her maternal grandparents’ birthplace. Testa makes her case not only against plastic pollution, but also for the work she’s done, resulting in something of a college-admissions–essay tone. Nevertheless, the first-person accounts paired with science will have an impact on readers. Unfortunately, no sources are cited and the lack of backmatter is a missed opportunity.

Brief yet inspirational, this story will galvanize youth to use their voices for change.