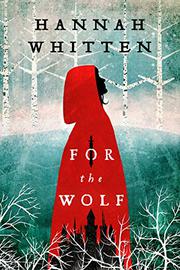 Twin princesses—one fated to become a queen, the other a martyr—find themselves caught up in an unexpected battle of dark magic and ancient gods.

Four hundred years ago, a Valleydan princess facing a loveless betrothal sought refuge in the Wilderwood with her lover, the Wolf. The legendary Five Kings—including her father and her husband-to-be—pursued them only to be trapped in the Wilderwood. Now, according to legend, the only hope of restoring the Five Kings to power lies in the ritual sacrifice of every Second Daughter born to Valleyda's queen. There hasn't been a second daughter for 100 years—until now. On her 20th birthday, Redarys accepts her fate and walks into the Wilderwood to become the Wolf's next victim only to find that the stories she grew up on were lies. The handsome man who lives in a crumbling castle deep in the forest is not the original Wolf but his son, and he wants nothing to do with Red or her sacrifice. Afraid of her wild magic abilities and the danger they pose to her sister, Neverah, Red refuses to leave the Wilderwood. Instead, she clings to the new Wolf, Eammon, who will do whatever it takes to protect her from the grisly fate of the other Second Daughters. Meanwhile, in the Valleydan capital, Neve's desperation to bring her sister home sets her on a path that may spell disaster for Red, Eammon, and the Wilderwood itself. Whitten weaves a captivating tale in this debut, in which even secondary characters come to feel like old friends. The novel seamlessly blends "Little Red Riding Hood" and "Beauty and the Beast" into an un-put-down-able fairy tale that traces the boundaries of duty, love, and loss.

A masterful debut from a must-read new voice in fantasy.