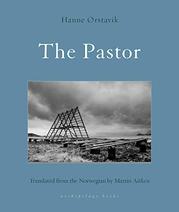 A pastor wrestles with her faith in a small Norwegian town.

After the suicide of her friend Kristiane, a puppeteer, Liv heads north from a seminary in Germany where she’s been pursuing a doctorate in theology to become the assistant to the parish priest in a remote Norwegian town. A year later, she still struggles to process her feelings about Kristiane’s death. Triggered by the suicide of the 19-year-old daughter of one of her parishioners, Liv’s thoughts lurch awkwardly in an undiluted stream of consciousness between the present day and memories of Kristiane—someone she describes repeatedly, and enigmatically, as “weightless”—reviving her regret over an argument she feels somehow may have contributed to her friend’s decision to take her life. To add to Liv’s anguish over what she confesses is “such a tangle, a hopeless endeavor to unravel an impossible tangle,” she frequently digresses to the subject of her doctoral research—the rebellion in 1852 of the Indigenous Sami against Norwegian settlers and their state church that “converged in a single point, a single channel, which was the language of Christianity.” The uprising occurred in a town several hours from Liv’s church, and she has an opportunity to visit the site when she attends a synod conference there. At that meeting, Liv, the only female priest in attendance, is confronted with the undisguised sexism of some of her colleagues, but that intriguing plot turn comes late in the novel and is abandoned quickly when another suicide attempt in Liv’s parish compels her to rush home. Ørstavik successfully evokes the atmosphere of life in rural Norway in winter, but the fact that her protagonist feels equally chilly and distant robs the story of much of its emotional force.

The struggles of a young clergywoman make for a less than compelling story.