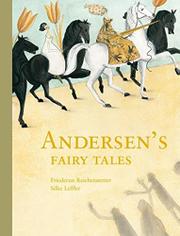 Leffler’s small, delicately drawn and colored figures—part collage, and mostly of fairies or distant, elegantly posed people—add graceful visual notes to every spread of a collection that resembles many others, but does mix some less familiar tales in with the usual chestnuts. Readers may be disappointed that there’s no “Little Mermaid,” and no Emperor to be seen, clothed or otherwise, in the “Emperor’s New Clothes.” However, the grisly “Traveling Companion,” which features an abusive ghost and a sorcerer with a taste for human eyes, makes pleasantly chilling reading, and Andersen’s cutting style of humor definitely comes through in “The Sweethearts,” about a top who abandons his love for a leather ball when she turns old and ugly, and the closer, in which “Jack the Dullard” gets the Princess by displaying a rude sense of fun. Reichenstetter trims away some of Andersen’s descriptive and ornamental fancies to retell the 13 tales in formal but not stiff language. A good choice for a gift, or to showcase the author’s always surprising versatility. (Short stories. 10-13)