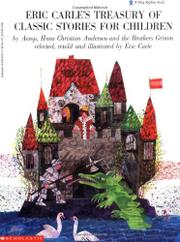 Twenty-two folk and fairy tales assembled from the author-illustrator's previous collections from Aesop (11), Andersen (7), and Grimm (4), which are all currently out of print, with emphasis on less familiar stories. In his simplified retellings, Carle attempts to preserve their essence while pruning descriptive passages that might prove difficult for early readers. Most successful are his entertaining, if undistinguished, versions of Aesop's fables and the Grimm stories; Andersen, on the other hand, has been so substantially cut that the stories (especially "The Magic Boots" and "The Marsh King's Daughter," for which the conclusion has been secularized) have lost their original focus. Carle's collage-style illustrations and the book's inviting design are plusses. Not a primary purchase, but a fair additional one.