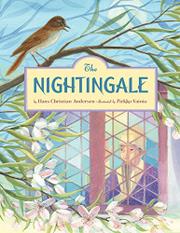 A fresh version of Andersen’s tender tale is illustrated with delicate watercolors.

This retelling, first published in Switzerland (and with an uncredited translation), is straightforward, allowing the soft, muted artwork to accent the details and ambiance. When the Emperor of China hears there is a nightingale that sings beautiful songs in his garden and he’s never heard of it, he commands that the bird be brought to him to sing. The little gray bird’s singing brings tears to his eyes, and the Emperor declares that the bird must remain at court. So it does, until the day the Emperor of Japan sends a mechanical bird encrusted with jewels, claiming his is better. From then on the mechanical bird is favored and the real nightingale forgotten—until years later, when the Emperor buys on his deathbed and the precious bejeweled bird breaks. The little gray nightingale flies to him and sings, bringing him back to life. Vainio’s illustrations vary from double- and full-page spreads to small vignettes that help to break up the lengthy text blocks. The palette of light pastels elegantly captures the medieval Chinese setting and provides an effective background for the plain-colored bird with a beautiful voice.

As the opening line says, “This story happened long, long ago, but that is all the more reason for telling it again, lest it be forgotten.