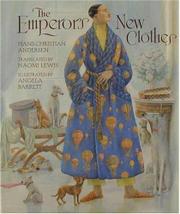 From Lewis (The Steadfast Tin Soldier, 1992, etc.), a plucky new treatment of the familiar tale. Here the emperor, everyone's favorite sartorial obsessive, is a preWW I dandy, but he is the same chump as always, duped by the two prankster weavers. Their cloth, ``invisible to anyone who was unfit for his job or particularly stupid,'' has all the court's self-important retainers and grandees in a swivet: They can't see the cloth but dare not admit it in fear of being branded an incompetent or a fool. The ruse goes all the way to the top, to the emperor's self-doubts and conventionality, and his absurd procession: When exposed for the clown he is by a child's shout, the emperor remains calm`` `If I stop, it will spoil the procession. And that would never do.' So on he stepped, even more proudly than before.'' The translation is fine and sure, and Barrett's artwork is splendid, full of lively vignettes and early-20th-century details, complete with a company of wise dogs and the impeccably expressive faces of bystanders. (Picture book/folklore. 6-9)