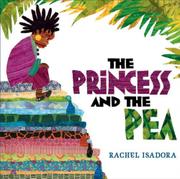 THE PRINCESS AND THE PEA

This simplified retelling of Andersen’s classic fairy tale is relocated from Europe to Africa, bright collages evoking the many hues of the continent. Isadora’s technique is reminiscent of Eric Carle’s, brightly painted papers showing vigorous brushstrokes cut and arranged against a white background mingling with printed papers in a celebration of color. For much of the narrative, the prince’s search for a “real” princess is downplayed in favor of “rightness,” a pleasingly contemporary angle that is lost when the last princess shows up and the tale resumes its traditional track, her sleepless night on the sabotaged mattresses revealing her real-princess sensitivity. Where this treatment goes dangerously wrong, however, is in the portrayal of the three rejected princesses who precede the mattress-princess: The first wears a series of rings that elongate her neck; the second is very dark and tattooed all over; the third is darker yet, overweight by Western standards and wears a dead fish on her head. The successful princess sports buoyant dreadlocks and physically adheres to an American norm. By thus exoticizing the rejected princesses, the tale does an enormous disservice to readers and continent alike. (Picture book/fairy tale. 4-8)