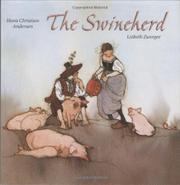 Andersen and Zwerger’s Swineherd enchants with an uncharacteristically (for him) funny resolution, courtesy of Bell’s graceful translation, and her characteristically ethereal illustrations. The classic tale tells of a minor prince whose beautiful gifts of a rose and a nightingale are disparaged and his proposal of marriage rejected by the emperor’s daughter. Undeterred, the prince takes a job tending the emperor’s pigs. The clever but lowly swineherd creates magical toys for which he demands and receives kisses from the princess as payment. For this transgression, the irate emperor kicks them both out of the kingdom. The prince reveals himself but instead of living happily ever after, he rejects the silly princess for her shallowness. Zwerger’s subdued ink wash-and-watercolor paintings charmingly depict royalty in not-so-very grand fashion, the pigs providing energetic counterpoint to the swags and frills of courtly dress. An amusing reversal of the usual prince-in-disguise story. (Picture book/fairy tale. 4-8)