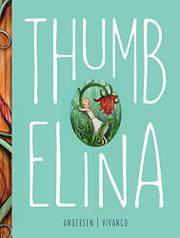 The adventures of a tiny girl amid flora and fauna in an imaginary land are again presented for young readers.

The text is acceptably adapted and accessible, but the illustrations, thickly textured and deeply colored, are leaden and rely on fashion rather than magic for their distinctiveness. The illustrator veers back and forth distractingly in her depiction of clothing, from the traditional 19th-century peasant dress with apron and kerchief of the field mouse to the 1920s look of the three female June bugs (cockchafers in some versions) who declare Thumbelina’s utter unsuitability as a mate for the big June bug who tries to capture her. The ugly toad who first steals her from her walnut-shell bed for her own son (shown in denim overalls) wears a frumpy pink polka-dot dress of no particular vintage. The haughty mole who wants to marry the girl wears a red fez and a fur-trimmed jacket to portray his wealth. Thumbelina wears simple white dresses, symbolizing her purity, but there is a lack of the magical lightness necessary to the tale. Even the double-page spread of the wedding scene when Thumbelina, with her large, Margaret Keane–like eyes, finally finds a suitable mate of just the right height, seems heavy and contrived.

While Andersen’s imaginative story, first published in 1835, keeps children listening or reading, this edition adds nothing new or special to a long literary history.