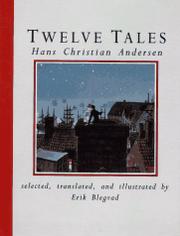 This collection is intelligently translated by a Dane whose grandfather once saw Andersen in the street. Throughout, Andersen's pixie-ish sense of humor remains intact. But while Blegvad's (The Three Little Pigs, 1980, etc.) highly detailed illustrations are deft, they are too small, and too cartoon-like, to fully complement the passionate Andersen. When the tin soldier is thrown in the oven (unsure whether the heat is ``caused by the fire or by love'') and realizes that he is melting but holds himself erect because the little dancer is watching—one of the world's great love stories is coming to a ten-hankie end. But in the tiny illustration our hero is just a blurry figure surrounded by sketchy flames. The whimsical pictures do well by the more humorous fables, such as ``What Father Does is Always Right.'' But Andersen, like his soldier, was not a man who ``wept tin.'' The match girl who longs for her grandmother, the fir tree who longs for glory, the tin soldier and the little dancer who long for each other—all return to the home they love only to die, and die young. Andersen's greatest stories were tragedies. They were written to haunt us and undoubtedly, one way or another, they always will. (Folklore. 8-12)