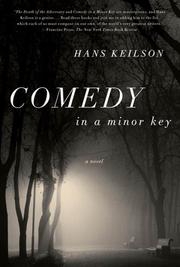 COMEDY IN A MINOR KEY

The first American publication of this 1947 novella accompanies the reissue of the German author’s The Death of the Adversary.

When the latter novel was translated for American publication in 1962, it received considerable acclaim for its illumination of emotional ambiguity during the rise to power of an unnamed Hitler. This shorter, slighter work by Keilson, a psychoanalyst who fled to the Netherlands in 1936 (and celebrated his 100th birthday last year), shares certain qualities with his masterwork, in its depiction of everyday detail and ritual against a backdrop—largely offstage—of unthinkable evil. Yet this is plainly minor work in comparison, not nearly as provocative nor as psychologically acute. A Dutch couple harbors a refugee for a year, keeping his existence as much of a secret as they can. Yet Nico, their secret upstairs housemate, may have some secrets of his own that he’s keeping from them. The dynamic among them shifts subtly over the year that he spends with them: “It stood like a wall between him and them, which slowly, slowly crumbled as the war dragged on and everything out of the ordinary and inhuman became typical and everyday.” One of the things that changes is the state of Nico’s health, which threatens to compromise the secret of his existence, and which ultimately results in a role reversal that represents whatever comedy there might be in this mirthless narrative. “He had defended himself against death from without, and then it had carried him off from within,” writes the author. “It was like a comedy where you expect the hero to emerge onstage, bringing resolution, from the right. And out he comes from the left...Later, though, the audience members go home surprised, delighted, and a little bit wiser for the experience.”

Longer on wisdom than either surprise or delight, this will mainly interest readers who have been captivated by Keilson’s better work.