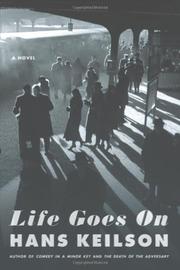 The first English language publication of this German author’s 1933 autobiographical first novel; Keilson (1909-2011) charts the slow decline of a shopkeeper in the Weimar Republic.

Life has been an uphill struggle for Herr Seldersen, as he is called. He started out as a traveling salesman before setting up his clothing store. Then came the Great War. He survived unharmed, but the decorated veteran next had to deal with the nightmare of hyperinflation. In 1928, when the novel opens, the economy has steadied somewhat, but there are still challenges. His landlord and competitor has his eye on his store and pressures Seldersen to move into less-attractive premises. A good-hearted, unambitious man, he cherishes his small town in Prussia, eastern Germany, but peace and quiet are elusive for this German counterpart of Willy Loman. He is caught in a vise between his demanding suppliers and his impoverished customers, buying on credit. It’s death by a thousand cuts. There’s no disguising the situation from his wife or his 16-year-old son, Albrecht. The details about bills of exchange can get boring, but there is real pathos in his son’s attempt to console his father (“old, lost, hopeless”). Albrecht’s coming-of-age, and that of his best friend, Fritz, is the secondary storyline. Fritz is a free spirit, a high-school dropout with soaring ambitions who will be crushed by the lack of opportunity. The more restrained Albrecht, meanwhile, is strongly influenced by a young judge, who believes in the life of the mind.

A Zola-esque naturalism is the strong suit of a novel that is more than just a period piece.