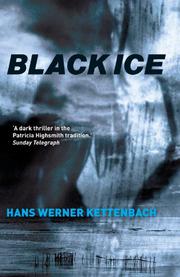 An office worker goes to extremes to prove that the boss’s wife was murdered by the boss.

At the funeral of popular local benefactress Erika Wallmann, Jupp Scholten, a longtime employee of Erika’s widower, can’t believe the confident Erika died from a reported fall or from rumored suicide. Scholten, 58, began working for Kottgen Civil Engineering Contractors way back when Erika’s father ran the office, and he may have had a crush on her. Now rumors that Kurt Wallmann is sleeping with his secretary lead Scholten to suspect him of murder. Knowing that Erika fell down a flight of stairs at the Wallmanns’ lakeside villa makes Scholten launch scattershot and impatient inquiries to the local newspaper, library and police station to determine whether it’s possible to make a patch of ice outdoors. Scholten’s domestic life, meanwhile, is a shambles. Henpecked by his wife Hilde, he has no friends but his cat Manny, regularly visits prostitutes and hits on fellow office workers, none of whom take him seriously. As Scholten gets closer to proving Wallmann’s guilt, he comes up with the audacious idea of following Wallmann’s example and killing his own wife.

A devilish dive into an obsessed mind by a prolific German crime writer (Davids Rasche, 1996, etc.). Despite, or because of, his many humorous quirks, Scholten is also a convincing Everyman.