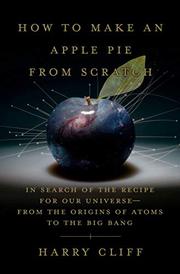 HOW TO MAKE AN APPLE PIE FROM SCRATCH

An entertainingly accurate account of how everything in the universe came to be, as told by a leading experimental physicist and popularizer.

Carl Sagan once said, “If you wish to make an apple pie from scratch, you must first invent the universe.” On July 4, 2012, the scientific community celebrated Higgsdependence Day, when the more than 10,000 physicists from around the world who had worked together for more 15 years announced conclusive evidence for the Higgs boson, the “God particle.” Without the Higgs boson and all the other star stuff that makes the universe and holds it together, butter, flour, water, and apples wouldn’t exist, and bakeries would have nothing to sell. In his first book, Cliff, a particle physicist at Cambridge and researcher at CERN’s Large Hadron Collider in Switzerland, brings physics down to Earth and persuades us that even if one can easily buy fruit and pie crusts, we should still care about their deep origins. Through a clear knowledge of many areas of physics as well as individual physicists, years spent in hands-on work at CERN, the instincts of a good storyteller, and a wicked sense of humor, Cliff draws readers into the bizarre and beautiful world inside the atom, offering an accessible education on the “standard model…a deceptively boring name for one of humankind’s greatest intellectual achievements. Developed over decades through the combined efforts of thousands of theorists and experimentalists, [it] says that everything we see around us—galaxies, stars, planets, and people—is made of just a few different types of particles, which are bound together inside atoms and molecules by a small number of fundamental forces.” In addition to the ins and outs of the Standard Model, this outstanding book, sometimes as funny as The Hitchhikers Guide to the Galaxy, will also teach readers why experimental subjects are often called “guinea pigs.”

The book for anyone who wants to understand some of the world’s most important scientific questions.