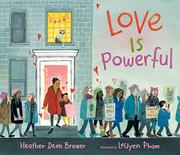 A child prepares for the Women’s March.

City-dwelling Mari is excited to march (a plethora of pussyhats indicates it’s the Women’s March). Crayons ready, she asks her mother what they’re coloring. The reply: “A message for the world.” But how will the whole world hear their message? The answer: “because love is powerful.” This titular refrain is repeated throughout the story as the pair joins the march. Though Mari doesn’t think anyone will hear in the crowd of thousands, she shouts out the message on her poster: “Love is powerful!” Pham’s bright, cheery art shows hearts emanating from Mari and drifting into the multiracial crowd (especially helpful for younger readers to understand the concept of a far-reaching message). Other marchers take up Mari’s call until the hearts expand farther and farther out into the city. Though the signs they and others carry seem disconnected from some important social justice issues, particularly for a book focusing on a Black child (there are no obvious Black Lives Matter signs, for instance), this feel-good tale can serve as an accessible starting place or to augment such books as Shane Evans’ We March (2012) and other stories that delve deeper into the reasons why people march and protest. The prose is somewhat unpolished, but a note from and photograph of the real Mari at book’s end charmingly grounds it. (This book was reviewed digitally with 9.4-by-22-inch double-page spreads viewed at 27% of actual size.)