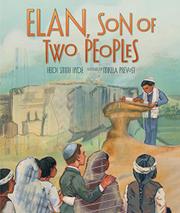 Thirteen-year-old Elan learns about his dual Jewish and Pueblo Indian heritage on a trip from San Francisco to New Mexico where he will read from the Torah and participate in a traditional Pueblo ceremony of becoming a man.

In 1898, Elan feels fortunate and special to have a Jewish father and a mother of Pueblo descent. While his family reviews the story of their mixed backgrounds, similarities between the two cultures become apparent. The transition from childhood to adult is respectfully addressed through Elan’s two coming-of-age ceremonies, witnessed by both families. For his bar mitzvah Torah reading, Elan proudly accepts a special tallit woven by his mother with symbols of the Star of David, the Ten Commandments, a stalk of corn and an oak tree. His parents remind Elan that he is the son of two proud nations, as his name means “oak tree” in Hebrew and “friendly” in the language of his mother’s people, the Acoma Pueblo. With his father, cousin Manolo and the other men of the community, Elan is welcomed into the Acoma tribe with rituals in the kiva (appropriately not depicted). Gouache scenes in soft, earthy tones gently depict the journey.

Based on the life of a 19th-century Jewish man who became Pueblo governor, a sweet celebration of diverse heritage.