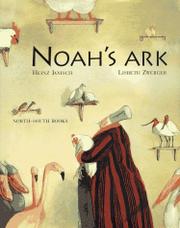 This unusual telling of a familiar story begins lyrically: ``It came to pass in the days when giants strode the earth and were heroes among men, God saw that His people had grown wicked. They thought only of war and destruction. And God was angry.'' Beyond that, the text is negligible, a frame to showcase Zwerger's art. She finds whimsy in the suits, pillbox hats, and black umbrellas that adorn Noah and his family; in scenes of the animals that were left behind (among them, the satyr and the unicorn); and in the paintings of enormous fish swimming in and out of submerged houses. The watercolors effectively portray reflections of people and the ark mirrored in blue and silvery grey water. Elsewhere, Zwerger presents labeled plates of the pairs of animals, reminiscent of an Audubon notebook. Eccentric, if not cohesive, and appealing. (Picture book. 5-8)