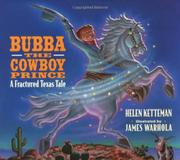 A Cinderella parody features the off-the-wall, whang-dang Texas hyperbole of Ketteman (The Year of No More Corn, 1993, etc.) and the insouciance of Warhola, who proves himself only too capable of creating a fairy godcow; that she's so appealingly whimsical makes it easy to accept the classic tale's inversions. The protagonist is Bubba, appropriately downtrodden and overworked by his wicked stepdaddy and loathsome brothers Dwayne and Milton, who spend their days bossing him around. The other half of the happy couple is Miz Lurleen, who owns ``the biggest spread west of the Brazos.'' She craves male companionship to help her work the place, ``and it wouldn't hurt if he was cute as a cow's ear, either.'' There are no surprises in this version except in the hilarious way the premise plays itself out and in Warhola's delightful visual surprises. When Lurleen tracks the bootless Bubba down, ``Dwayne and Milton and their wicked daddy threw chicken fits.'' Bubba and babe, hair as big as a Texas sun, ride off to a life of happy ranching, and readers will be proud to have been along for the courtship. (Picture book/folklore. 6-8)