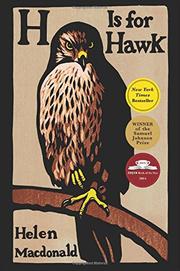 H IS FOR HAWK

An inspired, beautiful and absorbing account of a woman battling grief—with a goshawk.

Following the sudden death of her father, Macdonald (History and Philosophy/Cambridge Univ.; Falcon, 2006, etc.) tried staving off deep depression with a unique form of personal therapy: the purchase and training of an English goshawk, which she named Mabel. Although a trained falconer, the author chose a raptor both unfamiliar and unpredictable, a creature of mad confidence that became a means of working against madness. “The hawk was everything I wanted to be: solitary, self-possessed, free from grief, and numb to the hurts of human life,” she writes. As a devotee of birds of prey since girlhood, Macdonald knew the legends and the literature, particularly the cautionary example of The Once and Future King author T.H. White, whose 1951 book The Goshawk details his own painful battle to master his title subject. Macdonald dramatically parallels her own story with White’s, achieving a remarkable imaginative sympathy with the writer, a lonely, tormented homosexual fighting his own sadomasochistic demons. Even as she was learning from White’s mistakes, she found herself very much in his shoes, watching her life fall apart as the painfully slow bonding process with Mabel took over. Just how much do animals and humans have in common? The more Macdonald got to know her, the more Mabel confounded her notions about what the species was supposed to represent. Is a hawk a symbol of might or independence, or is that just our attempt to remake the animal world in our own image? Writing with breathless urgency that only rarely skirts the melodramatic, Macdonald broadens her scope well beyond herself to focus on the antagonism between people and the environment.

Whether you call this a personal story or nature writing, it’s poignant, thoughtful and moving—and likely to become a classic in either genre.