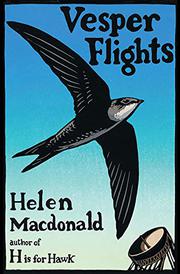 Falconer and writer Macdonald follows on elegant memoir H Is for Hawk (2015) with a set of essays on nature.

“I choose to think that my subject is love,” writes the author at the beginning, “and most specifically love for the glittering world of non-human life around us.” Love sometimes turns to lamentation as she notes how much of the natural world has been destroyed in her lifetime. There are some particularly wonderful moments in this altogether memorable collection, as when Macdonald recounts retreating from a shy girlhood, teased and even bullied by her schoolmates, with the aid of binoculars and field guides that allowed her to escape into a different, better world: “This method of finding refuge from difficulty was an abiding feature of my childhood.” Later in that passage, she continues, “when I was a child I’d assumed animals were just like me. Later I thought I could escape myself by pretending I was an animal. Both were founded on the same mistake. For the deepest lesson animals have taught me is how easily and unconsciously we see other lives as mirrors of our own.” The author also recounts her treks looking for wild boars, the descendants of once-domesticated pigs that are now not quite like pigs at all, having reclaimed ancestral fierceness. Macdonald allows that while her encounters with such creatures are eminently real, she’s fully open to the possibilities of symbolic encounter as well. Anthropomorphism may be a sin among biologists, but as long as it doesn’t go to silly lengths, she’s not above decorating a nest box—and those decorations, she writes in a perceptive piece, are as class-inflected as anything else in class-conscious Britain. Perhaps the finest piece is also the most sobering, a reflection on the disappearance of spring, “increasingly a short flash of sudden warmth before summer, hardly a season at all.”

Exemplary writing about the intersection of the animal and human worlds.