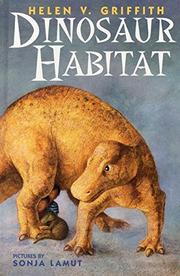 Dinosaurs break out of their terrarium confines, taking two brothers for a wild ride, in this junior Jurassic Park from Griffith (Dream Meadow, 1994, etc.). Every kid’s dinosaur daydream becomes reality when 12-year-old Nathan tosses younger brother Ryan’s fossilized egg across the room, where it lands in the center of Ryan’s terrarium. As mist envelops the bedroom, desks and chairs recede and carpets become squishy; the boys find themselves lost in a larger-than-life swampy, volcanic habitat, whose rollicking, rampaging residents are giant dinosaurs and insects. Nathan and Ryan easily accept their situation in the face of immediate danger from an ornery coelophysis, a reptilian home-wrecker who steals a mother hadrosaur’s nest eggs; each brief, subsequent episode introduces a new dinosaur, anticipated by Ryan, who knows the attributes of the plastic creatures from his terrarium. Despite a repetitive plot, Griffith competently varies the action and description of the boys’ alternating thrill and terror in the face of such creatures as a “gigantic, glittering carnivore,” or the threat of a lava-spewing volcano. Some irksome banter between the brothers—Nathan constantly muddling dinosaur names with Ryan just as regularly correcting him—doesn’t detract from the screeches, wails, and shrieks that will certainly entice newly independent readers into the pages. (b&w illustrations, not seen) (Fiction. 8-11)