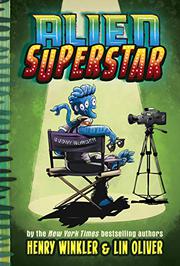 From the Alien Superstar series, volume 1

Citizen Short Nose, a 13-year-old, blue-skinned, six-eyed, bipedal ET, has left his home world in an effort to escape the authoritarian forces that reign there. The teen runaway lands his spacecraft in the middle of Universal Studios and easily blends in among the tourists and actors in movie costumes. Citizen Short Nose quickly changes his name to Buddy C. Burger and befriends Luis Rivera, an 18-year-old Latinx actor who moonlights as Frankenstein on the Universal lot. Inspired to be an actor by his grandmother Wrinkle’s love of Earth culture, Buddy lands a gig on Oddball Academy, playing (of course) an alien from another world. On set, Buddy befriends Cassidy Cambridge, the brown-skinned teen star of the show. Buddy balances keeping his true identity secret (everyone just assumes he’s wearing an alien costume) with becoming an overnight sensation. The book is efficiently written, moving the story forward so quickly that readers won’t have time to think too hard about the bizarre circumstances necessary for the whole thing to work. This series opener’s big problem is the ending: The story just stops. Characters are established and plot mechanics are put together, but the book basically trusts readers to show up for the next installment. Those enamored with Hollywood gags and sci-fi plot boiling will probably be engaged enough to do so.

A decent start to a silly sci-fi series.