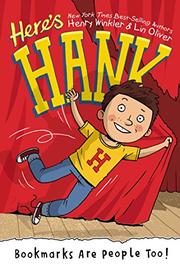 BOOKMARKS ARE PEOPLE TOO!

From the Here's Hank series, volume 1

Hank’s hopes of playing Aqua Fly, a comic-book character, in the upcoming class play founder when, despite plenty of coaching and preparation, he freezes up during tryouts. He is not particularly comforted when his sympathetic teacher adds a nonspeaking role as a bookmark to the play just for him. Following the pattern laid down in his previous appearances as an older child, he gets plenty of help and support from understanding friends (including Ashley Wong, a new apartment-house neighbor). He even manages to turn lemons into lemonade with a quick bit of improv when Nick “the Tick” McKelty, the sneering classmate who took his preferred role, blanks on his lines during the performance. As the aforementioned bully not only chokes in the clutch and gets a demeaning nickname, but is fat, boastful and eats like a pig, the authors’ sensitivity is rather one-sided. Still, Hank has a winning way of bouncing back from adversity, and like the frequent black-and-white line-and-wash drawings, the typeface is designed with easy legibility in mind.

An uncomplicated opener, with some funny bits and a clear but not heavy agenda.