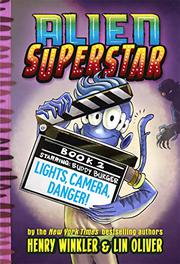 From the Alien Superstar series, volume 2

Now that he’s traded life on an oppressive planet for the glitz and glamour of celebrity, Buddy Berger is excited to spend his time acting on the hit series Oddball Academy and learning more about his new home: Hollywood. There’s nothing Buddy can’t accomplish with his friends by his side and hope in his heart. But everything Buddy holds dear is threatened when Citizen Cruel, the ruthless enforcer from the evil Squadron, arrives on Earth to bring Buddy back to his home planet by any means necessary. Can Buddy fend off this villainous pursuit and keep his secret? The breathless pace that made the previous installment such a charmer wears out its welcome here: Buddy bounces from mishap to mishap, the momentum allowing for plenty of jokes but no characterization for any of the players beneath the surface. Plenty of things happen but it doesn’t really amount to anything other than a clothesline the authors are able to hang gags on. The result is a mixed bag for readers: a fun time that won’t inspire any deep attraction beyond the book’s end. Readers will find this entry’s ending much more satisfactory than its predecessor’s, however; there’s a solid conclusion with a tease for what’s coming next. Buddy presents himself as a White teen when he isn’t in his natural blue skin while previous titles indicate diversity among his friends.

A mixed bag of a sequel.