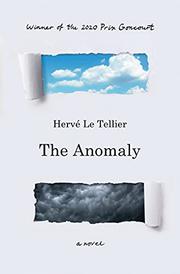 A mystifying phenomenon sends shock waves through the world of an alternate 2021.

The opening chapter presents a detailed portrait of a professional assassin called Blake, a man described as “extremely meticulous, cautious, and imaginative.” The same adjectives could be applied to author Le Tellier: Trained as a mathematician and a scientific journalist, he uses these first pages to prime the reader for his methodically crafted story. The action then abruptly jumps to Victor Miesel, a disillusioned author and translator who becomes “mired in a horrible impression of unreality” after a turbulent flight. Over the following weeks, Miesel feverishly writes a new book called The anomaly, sends it to his editor, and kills himself. Then, snap, a new chapter begins, introducing a film editor named Lucie, who, along with every subsequently introduced character (eleven, altogether), is inexplicably requisitioned by the authorities.The connection between these people soon becomes clear: They were all passengers on the same turbulent flight. What exactly happened on this airplane? Le Tellier withholds the details for long enough that revealing the mystery here would spoil the entrancing quality of the book. Hunter’s brilliant translation from the French—her fifth collaboration with Le Tellier—transforms Le Tellier’s distinct French voice into a distinct English one. More importantly, Hunter captures the playful exhilaration with which Le Tellier marries his audacious plot to a deep concern for existentialist philosophy. Excerpts from Miesel’s The anomaly appear in epigraphs for each new section, including: “There is something admirable that always surpasses knowledge, intelligence, and even genius, and that is incomprehension.”

Humorous, captivating, thoughtful—existentialism has never been so thrilling.