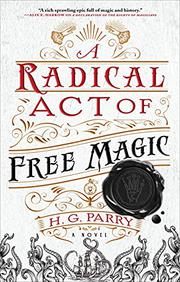 A RADICAL ACT OF FREE MAGIC

Leaders of Britain’s abolitionist movement join forces with a veteran of the Haitian revolution to push back Napoleon’s deadly forces in Parry’s second Shadow Histories novel.

Napoléon Bonaparte isn’t a particularly talented magician, but his potential as a general and conqueror attracts the attention of the same mysterious figure who manipulated Robespierre to set off the Reign of Terror in A Declaration of the Rights of Magicians (2020). When Bonaparte summons a kraken to serve the French navy and later finds a dragon hidden in the sands of Egypt, it’s only a matter of time before France and Europe fall at his feet. William Pitt, meanwhile, is growing weaker by the day as he works to keep a deadly and dangerous magical secret from his enemies. William Wilberforce continues to fight for abolition but is stymied at every turn. Fina uses her magic to help Toussaint Louverture keep hold of Saint-Domingue, but she eventually makes the journey to London and meets Pitt and Wilberforce. With a first-rate blend of political drama and magic battle–action, Parry manages to inject tension and stakes into a historical drama where average readers will know at least the broad strokes of the ending. Effortlessly switching from France to England to Egypt to Saint-Domingue, Parry folds in show-stopping new characters like Kate Dove, a commoner weather mage dead-set on avenging her brother’s death by kraken, and Lady Hester Stanhope, who would become one of the most famous explorers of the 19th century. When the three main characters, Fina, Pitt, and Wilberforce, finally face off with the stranger, the resulting conflict brings the series’ meditations on idealism, the fight for human rights, and the necessary limits of institutional power to a head.