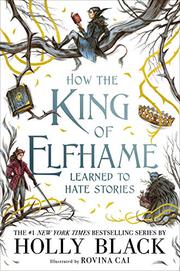 HOW THE KING OF ELFHAME LEARNED TO HATE STORIES

From the Folk of the Air series, volume 3.5

In Faerie, a cruel prince met his match in Jude, a human raised in his world. An entire trilogy tells their tale from her perspective; now the prince gets center stage. This lavishly illustrated tome, more a series of vignettes than a complete novel, shows critical moments in Cardan’s life, including moments previously seen through Jude’s perspective. The entirety is framed within a moment that takes place after the end of The Queen of Nothing (2019), providing a glimpse into the maturing relationships between Jude and Cardan and between Cardan and his responsibilities as High King of Elfhame, a land whose multihued, multiformed denizens cannot lie. Woven throughout are three iterations of a story, initially told to a young Cardan, each version different in specifics and moral but all centered on a boy with a heart of stone and a monstrous, cursed bride. Readers familiar with Cardan and Jude’s tumultuous and sometimes troubling love will recognize notes within this repeated tale, but each telling also stands alone as a complete tale, one that feels both inevitable and fresh. Black continues to build an ever expanding mythos with her Faerie stories, and while this volume requires prior knowledge of The Folk of the Air trilogy, it offers new delights along with familiar moments retold.

Fan-service? Yes—and fans will rejoice in every dark, luscious moment.