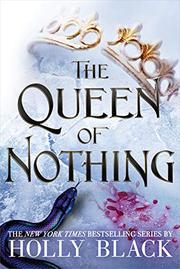 THE QUEEN OF NOTHING

From the Folk of the Air series, volume 3

After the tumultuous ending to the last volume (marriage, exile, and the seeming collapse of all her plots), Jude finds herself in the human world, which lacks appeal despite a childhood spent longing to go back. The price of her upbringing becomes clear: A human raised in the multihued, multiformed, always capricious Faerie High Court by the man who killed her parents, trained for intrigue and combat, recruited to a spy organization, and ultimately the power behind the coup and the latest High King, Jude no longer understands how to exist happily in a world that isn’t full of magic and danger. A plea from her estranged twin sends her secretly back to Faerie, where things immediately come to a boil with Cardan (king, nemesis, love interest) and all the many political strands Jude has tugged on for the past two volumes. New readers will need to go back to The Cruel Prince (2018) to follow the complexities—political and personal side plots abound—but the legions of established fans will love every minute of this lushly described, tightly plotted trilogy closer. Jude might be traumatized and emotionally unhealthy, but she’s an antihero worth cheering on. There are few physical descriptions of humans and some queer representation.

Whether you came for the lore or the love, perfection.