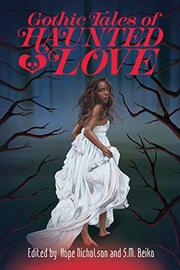 This anthology pays tribute to the gothic-romance style seen in comic books from their 1960s and ‘70s heyday, updating them in fresh ways.

Like the novels they’re based on, gothic-romance comic books “embodied the best of the gothic-romance tradition—isolated and eerie locations, inherited crumbling manors, family secrets, ghosts, secret identities, and passions heightened by mysterious circumstances,” plus the iconic image of a woman in a white nightgown running away from a dark mansion. The 20 pieces collected here by Nicholson (The Spectacular Sisterhood of Superwomen, 2017, etc.) and Beiko (Scion of the Fox, 2017, etc.) vary in style, tone, and subject but always play with the genre and reader expectations in creative ways. For example, the opening story, “Crush” (writing by Janet Hetherington; art by Ronn Sutton; color art by Becka Kizie; lettering by Zakk Saam), employs a traditional comic-book style and seems at first to be a typical, suspenseful gothic setup: A governess goes to a lonely mansion owned by a ship’s captain whose “eyes are as wild as the sea.” (With his seven children, the story has amusing resonance with The Sound of Music as well.) Not so typical is that the heroine, Constance Mayhew, is black, and the children are undaunted by their harsh father. Other stories, too, turn the tables on tradition. Besides people of color, they also offer powerful heroines; gay and lesbian characters; a mix of several fresh artistic styles; modern-day settings; outcomes that don’t depend on winning love; stories in Vietnamese and Korean; and even a quiz (“How grave is your misfortune?”). By turns romantic, dreamy, death-haunted, or tongue-in-cheek, this is a splendid offering, entertaining on its own and provokingly genre-bending. Editors Nicholson and Beiko have done readers a real service by assembling such a diverse, attractive collection by talented writers and artists. Their love for the genre comes through, and this volume is likely to gain more fans.

A must-have for comic historians and those interested in gothic romances, romance comics, and LGBTQ interpretations of traditional forms—highly entertaining.