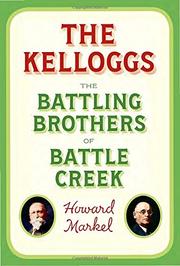 The Battling Brothers of Battle Creek

A dual biography of the highly successful Kellogg brothers, who “fought, litigated, and plotted against one another with a passion more akin to grand opera than the kinship of brothers.”

One brother invented Corn Flakes, and the other was the most famous doctor of his time. They hated each other. Readers who suspect their lives might provide entertainment will not be disappointed by this delightful biography by Markel (History of Medicine/Univ. of Michigan; An Anatomy of Addiction: Sigmund Freud, William Halsted, and the Miracle Drug Cocaine, 2011, etc.). In 1876, physician John Harvey Kellogg (1853-1943) took charge of a small Battle Creek sanitarium that followed Seventh-Day Adventist principles of vegetarianism and abstinence from tobacco and alcohol. A charismatic promoter and author, he vastly expanded the sanitarium and became a world-famous media doctor. His advice represented a vast improvement over 19th-century practices of infrequent bathing, excessive use of alcohol, and a diet heavy on meat, fat, and sugar. He was prescient in advocating exercise, clean water, stress reduction, and plenty of sleep but also relentless enemas, as little sex as possible, and absolutely no masturbation. No businessman, John hired his brother Will Keith Kellogg (1860-1951) to manage the enterprise, rewarding his efficiency with low pay and no respect. It was only in 1906 that 46-year-old Will escaped, launched the Kellogg Company, and made a fortune. John responded with more than a decade of lawsuits and a lifetime of sniping. Markel refreshingly resists the temptation—not resisted by films and novels—to deliver caricatures. Embracing scientific medicine, John was a skilled, respected surgeon who was charitable and uninterested in riches. Will was a brilliant entrepreneur, a considerate boss, and founder of a world-class humanitarian foundation. The author effectively shows the brothers’ “remarkable success was mutually dependent if not outright synergistic.”

A superb warts-and-all account of two men whose lives help illuminate the rise of health promotion and the modern food industry.