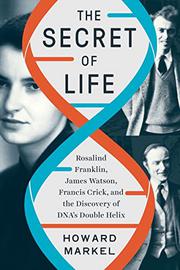 THE SECRET OF LIFE

A medical historian offers a new history of one of the 20th century’s most significant scientific quests.

The structure of DNA, announced in 1953 by James Watson and Francis Crick, marked the beginning of the spectacular genetics revolution that has continually accelerated since then. There is no shortage of excellent histories, but Markel, a Guggenheim fellow and professor of medicine at the University of Michigan, has written one of the best. After a quick review of the relevant advancements in the 19th century, the author delivers long, satisfying biographies of the leading figures as well as a large supporting cast, including Linus Pauling and John Randall, who directed the biophysics unit at King’s College in London. Markel provides a meticulous account of DNA research by others, as well, and he emphasizes that Watson and Crick made their breakthrough by examining X-ray photographs of DNA crystals. Producing such crystals required extraordinary dexterity, and photographing them demanded acute technical expertise, which often included building X-ray machines from scratch. The X-ray experts were Maurice Wilkins (who shared the Nobel Prize with Watson and Crick) and Rosalind Franklin, recruited in 1950 when Wilkins seemed to be stalled. Nearly every historian in this area explores the intense dislike between Wilkins and Franklin; all, Markel included, deliver reasonable, if differing explanations. Watson famously disparaged her in his 1968 bestseller, The Double Helix (“he transmogrified her into ‘Rosy,’ the one-dimensional archenemy”), but Markel turns up admirers. In the end, Watson and Crick examined X-rays (Franklin’s were better than Wilkins’), built their model, and went down in history. Franklin died in 1958, and the others barely mentioned her in their 30-minute Nobel Prize lectures in 1962. Nowadays, everyone agrees that she was treated badly and that her work—examined without her permission (“one of the most egregious ripoffs in the history of science”)—was essential to the discovery, but during her life, she never expressed resentment.

A brilliant addition to the literature on the history of biological discovery.