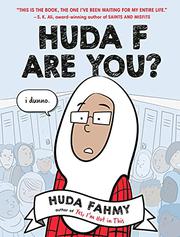 HUDA F ARE YOU?

Fahmy’s fictionalized graphic-novel memoir explores the complexities of identity and what it costs to be pleasing.

When Egyptian American Huda and her family move to Dearborn, Michigan, she finds that suddenly she is far from being the only hijabi in her school. At a loss, Huda realizes that she has always adapted to accommodate others instead of finding her own interests. Although she fears that her personality was defined by being different due to her hijab, she also doesn’t fit in with the hijabi athletes, gamers, and fashionistas at school or with her masjid peers, since her parents previously emphasized cultural assimilation. Even her position as the smart sister in her family is challenged as Huda faces academic challenges and a teacher who is hostile toward Muslim students. Fahmy comedically captures Huda’s embarrassing moments, conflicting desires for validation and acceptance, and the sarcasm she uses as a coping mechanism when facing everyday Islamophobia, xenophobia, bigotry, and microaggressions. Neither does the author shy away from reflecting on Huda’s internalized Islamophobia, self-hate, and moments of cowardice as she grows and learns. Background Muslim characters show different skin tones and female characters wearing different styles of hijab as well as those who do not. The full-color artwork shows stylized, cartoon-style figures whose minimalistic features emphasize the emotions shown by their facial expressions. A variety of lettering styles signals background commentary, humorous asides, sound effects, and more.

Hilarious, charming, and much needed.